THE CHALICE CHALLENGE: Where To Begin?

I've been working up the nerve to start on the chalice restoration project. It was hard to know where to begin, but once I'd disassembled it, I knew there was no turning back.  Five different elements made up the chalice: the cup, the stem, the base, the underside and the connector, and it was clear that only one of those five parts - the stem - was incapable of ruining my life, because it would be hidden inside the base. The other four?  There were infinite things that could go wrong as I restored them, and most of them would be visible from a mile away.

I've often found that starting a complex project at the beginning is not a great idea, because it's too easy from that vantage point to make excuses not to continue.  In situations like this,  the best place to start is in the middle.  Then, as you view the boatload of work you have ahead of you, there is one island of peace and tranquillity in the distance: the part you've already done.

Now, Ivaan would not agree with me on this approach.  Being an artist, Ivaan actually loved the first steps of a new project.  All he saw was potential.  I am not an artist; all I see is the potential for disaster.

I started in the middle.  At the connecting point between the cup and the base was a wooden section that looked as though it might originally have been part of a lamp.  I'm embarrassed to admit when I first saw that wooden connecting piece, I was less than gracious about it. In fact, it was quite an inventive solution to the problem of how to connect the base to the cup portion, especially since Ivaan made the base of the chalice in 1973, when he was 29, new to metal arts, and broke.  (He used to describe his status as self-unemployed).  Here it is: 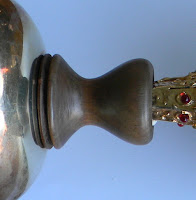 And clearly it stood the test of time, because 42 years later, it's still there and it still works.  So mea culpa for my sarcasm, Ivaan.  And since I am neither 29, new to metal arts, nor broke, I decided that I would replace the wooden connector with something more sumptuous.  I settled on a two-inch ball of lapis lazuli, a semi-precious stone.

Today I took the chalice to a shop owned by Claude, a man who cuts and polishes stones.  Claude persuaded me that an egg-shaped piece of lapis would work best, and that seemed to make good sense, because it would weigh less than a round ball, and because eggs are an important theme in Ivaan's work and in the Ukrainian Orthodox religion.

With some trepidation, I left the entire chalice with Claude for the afternoon, forced myself to go shopping while he worked on it, and when I returned three hours later - voilà. Claude had drilled out the centre of the lapis egg just wide enough that the stem slid through it, and flattened the top and bottom of the egg so it fit perfectly against both the cup and the base. 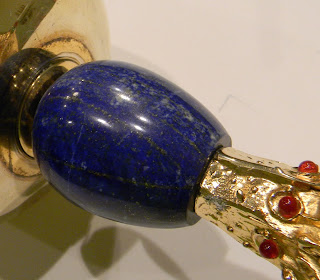 Thank you, Claude.  This was a really satisfying day. And Ivaan, I bet you're proud of me.
Posted by Eya at 9:34 PM