Sometimes I wonder why people trust me to make their wedding rings.

Today I was working on a fabulous engagement ring, and I opened a little package that I believed contained a fair-sized solitaire diamond I wanted to fit into the ring.  Nope.  It actually contained six small diamonds....until I opened the package, that is.  Three of the diamonds instantly went flying.  You have no idea how far and wide diamonds can travel.  I spent the afternoon looking for them.  One actually landed behind my motorcycle. 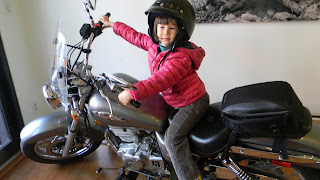 Here's my motorcycle, just so you get the picture.  (My friend Kai is practising leaning into a turn).

I was so exhausted from searching for the three diamonds, I took a break, checked my email and there was a message from my friends Bernie and Mimi in NYC.  In replying to their message, I decided to send them a photo of my new ride (see above).  Now, rewind to before I foolishly opened the package of diamonds. I'd just been on Twitter,  blathering on about the tiny and delightful Wolf convection oven I'd bought this morning, and so I sent Bernie and Mimi this photo instead: 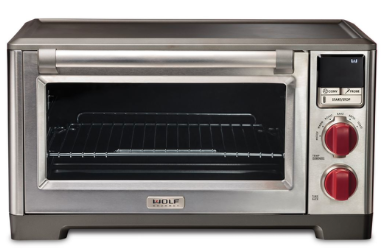 Well, Bernie couldn't resist.  "How many miles per litre does your Wolf toaster oven get?" he asked.  And that's when it clicked, that I may not have sent him the correct photograph.  Grrrr.

So right now the engagement ring is 75 per cent finished, the new Wolf oven arrives on Monday, Bernie has probably picked himself up off the floor from laughing, all the diamonds have been located, and I'd consider going out for a motorcycle ride to celebrate, but with my track record today, I'm pretty sure something would go wrong.

You know how they say husbands and wives start to look more alike the longer they're married?  I'm beginning to think that in our case, I'm becoming more like Ivaan.  As in, more chaotic.

And seriously, who'd trust him to make their wedding rings?