THE ROAD TO ATELIER IVAAN 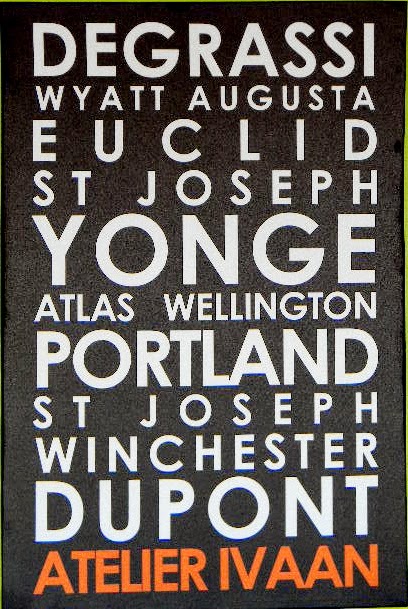 When I'm giving someone directions to Atelier Ivaan, I often say "We're on the south side of Dupont, between the Universal Grill and Vinny's Panini."  But every time I provide these valuable navigation tools, I have the uneasy feeling that I'm not doing justice to Ivaan's journey, which resulted in the existence of Atelier Ivaan.

So when I had an opportunity to create a custom streetcar-style sign, I immediately thought of honouring each of the streets on which Ivaan lived in Toronto.  Each time I see the sign, I'm reminded of the stories Ivaan has told me of living in each of these places.

Degrassi, Wyatt and Augusta were the streets of Ivaan's childhood.  Euclid was home during his high school years.  When he first moved out of his parents' home, he moved into a tiny apartment at 2 St. Joseph Street, and that's where he lived when I first met him.  He lived at two addresses on Yonge Street.  Atlas was a brief pied-a-terre,  and Wellington and Portland Streets were the scene of our engagement and marriage. In fact, Portland was by far the longest residence of both our lives.  We lived there for over 15 years.

We moved back to St. Joseph Street in the last year of Ivaan's life, when his paralysis made it essential to live on one level; it was a challenging transition for both of us.  On the one hand, it meant selling the house we loved and where we'd had so much fun.  On the other hand, once we moved to St. Joseph Street, I was right on the university campus, and we were very close to the hospitals we relied on.

Winchester Street is the location of Toronto Necropolis Cemetery, where Ivaan chose to be buried, and Dupont is, I guess, the scene of his resurrection as Atelier Ivaan.

For a while, I hung the sign in the front window, alternating it with the portrait of Ivaan by Daniel P. Izzard, but I've learned that people prefer to see Ivaan's handsome portrait in the window, so the sign now hangs on the wall of the store.  I really feel it honours Ivaan's journey through Toronto and his ongoing legacy in the form of Atelier Ivaan.
Posted by Eya at 1:34 PM