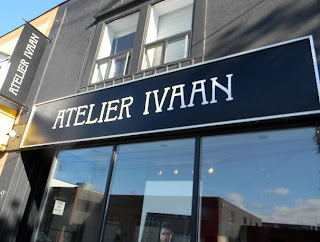 Now and again, somebody will come into ATELIER IVAAN and ask "So...what do you do here exactly?"  And though I like to think of the atelier as an understated and elegant home for some breathtakingly beautiful metal art, perhaps we're more understated than I realize.  Sometimes the antique typewriter in the window, which displays our Hours of Operation, confuses people.  Perhaps they are also misled by the paintings and photography on the walls, as I'm occasionally asked if I'd be willing to paint someone's portrait. And my baby grand piano gives some people the impression that I teach music.

I've often thought I should make better use of my space, but usually my daydreams don't go much further than thinking about opening up a massage studio in my office next door, so I can have a massage whenever I want.

But early this morning, I was in the store, chatting on the phone with my brother.  I heard someone trying to open the door of the store.  I turned and saw an elderly Asian man, with what appeared to be a pile of laundry in his arms, pulling at the door handle, then knocking when he realized the door was locked.

I went to the door, unlocked it and asked if I could help him.  He tried to hand me his armload of clothing and said, "I need my pants fixed."  I replied, "Well, we're a jewellery store.  We don't fix pants."  He got a crabby expression on his face, pointed at our sign and asked, "So why does it say ALTERATIONS IVAAN?"

I promptly emailed my friend Lesia the story, knowing she'd get a kick out of it, and she just as promptly replied (and this is why I think she's actually "one of the tribe", living undercover as a member of Toronto's Ukrainian community):

"So would it have killed you to hem his pants?"

It's at moments like this that I can feel Ivaan in here, tears of laughter just streaming down his face.
Posted by Eya at 5:53 PM