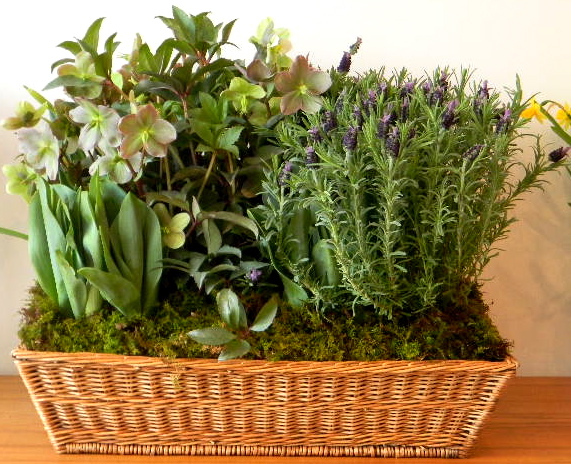 One of the peculiar things about owning Atelier Ivaan is that our building occupies the entire lot. We're attached to the neighbouring buildings on both sides, and at the front and rear our building continues right up to the lot line. So not a blade of grass, not a dandelion, not a tree grows anywhere at Atelier Ivaan. It's a glorious spring day today, and this afternoon I found myself thinking that if I am going to enjoy communing with nature, I'd better head over to the cemetery for a visit.

This thought had barely registered when a van pulled up outside our building. Seconds later, the lower half of a young man approached the front door.   His upper half reminded me of Scene V from Shakespeare's Macbeth, wherein Macbeth says:

'Fear not, till Birnam wood
Do come to Dunsinane': and now a wood
Comes toward Dunsinane...

It truly looked as though Birnam Wood were advancing on Atelier Ivaan. The floral basket pictured above - an entire lush garden - completely concealed the upper half of the young man.  He could barely make it through our front door.  He asked if I were Eya, which I conceded I was, although if he'd asked if I were Lady Macbeth I would probably have conceded that too.  That's how astonished I was.

I am rarely at a loss for words, but I could barely stammer out the question, "Who is this from?".  The young man's face emerged from behind the basket as he lowered it to the table.  Looking visibly relieved, he said "Oh, there's a card attached.  Enjoy it!" and departed.

I stood there for a few moments in awe.  Then I peered around the other side of this glorious arrangement and found an envelope, from which I extracted a handwritten note.

Now, there is a coincidence that hit me as I read the note, because Shakespeare played an additional part in the story behind this fabulous garden.  The story began on May 14, 1967 when Chatelaine Magazine dispatched a young Ivaan to Stratford, Ontario to photograph a handsome English actor named Alan Bates, who was being interviewed for Chatelaine by a very bright, talented young woman whose star was ascending with considerable velocity in the world of Canadian journalism and broadcasting. This young woman, whom we'll call Barbara Frum, wrote very much as she spoke: with disarming humour and warmth, coupled with a fierce intelligence. Although she looked like a stylish university freshman, she was in fact already married, with two young children.  Her interview with Alan Bates was clearly a hit with the actor, because he included it on his website, where it still resides today.  Bates was performing at the Stratford Shakespearean Festival that summer - although I don't know if he was playing Macbeth.  Barbara clearly won him over, being smart enough to have brought along a picnic of steak sandwiches and danish pastries. And we all know the way to a heartthrob's heart is through his stomach.

Ivaan enjoyed photographing the pair of them, and thought that the photographs were sufficiently important that six years later he climbed into a dumpster to retrieve them, when Maclean Hunter Publishing disbanded its in-house photographic studio and unceremoniously disposed of the entire archive of photographs.  Ivaan kept those photographs for 40 years.

I recently contacted Barbara Frum's daughter, Linda, to ask if she would like to have these photos of her late mother.  After all, she and her brother had been with their mother that day at Stratford, and Alan Bates had spent part of the afternoon helping to fish them out of the Avon River.  Linda responded immediately with warm enthusiasm.  I dropped them off for her this morning....and this afternoon I received this magnificent gift from her, along with her handwritten note, which I will treasure.

I keep looking over at it, wondering if it's possible that a squirrel or two is lurking in Birnam Wood.  It's that big.  Thank you, Linda.