February 3rd is a very significant day in our family because it is the birthday of three family members.  So when something happens on February 3rd, I usually remember it.


On February 3rd, 2012, I was on the Dupont bus, heading eastbound.  I was feeling dejected.  I'd just been to see a property that was for sale on Dupont, and I was disappointed that it was not going to be suitable for my purposes.  "I'll never find the kind of place I'm looking for", I grumbled to myself.  As the bus crossed Shaw Street, it passed a compact two-storey commercial building on the south side of the street.  I'd noticed it before, and admired it.  "If I owned that building, I'd never complain about anything again", I said to myself.  Here's what it looked like. 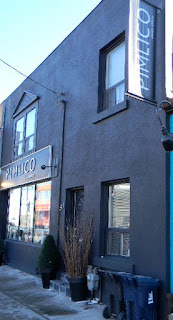 The following evening, my niece Justine emailed me a "Just Listed" flyer from a real estate agent, containing a listing for a house identical to, and just down the street from, our family home. "Look at this house; it's the same as Grandpa's", she wrote.  As I opened the attachment, I glanced at the house she was referring to, but was amazed to see there was a second listing on the flyer....for the building I'd coveted the day before.  It had not been for sale yesterday.  Suddenly it was for sale.  I didn't get too much sleep that night.  By the morning, I knew I had to act quickly.  I called our friend Myron, who is a realtor, and begged him to drop everything and take me to see it.  Myron made an appointment for three o'clock that afternoon.  By two-thirty I was in front of the building.

Myron knows me pretty well.  So he wasn't too horrified when he pulled up in front of the building and found me inside, deep in conversation with Tatiana, the current owner.  We toured the building.  I made up my mind.  Myron made his recommendation.  I trust him a lot so I listened.  A few days later, Myron drew up an offer.  Another offer came in.  I sweetened my offer.  Dead silence.  It looked like I had lost out to a better offer. On February 13th I went to sleep wondering if I had made a mistake by not offering more money.  I woke up next morning telling myself that I regretted letting it slip through my fingers.  But all was not lost.  Myron phoned with news that I was still "in the game" and before the day was over, I'd received this amazing Valentine's gift from Ivaan.

The building didn't always look sleek and stylish; three years previously, Tatiana had bought the building from a family who had operated a shoe repair business there for 30 years.  Here's how it looked  at that time: 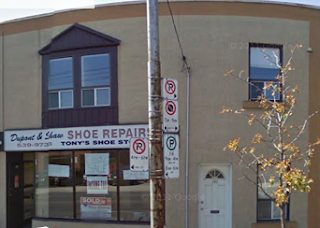 This is the building that Tatiana renovated into her stylish Pimlico Design Gallery.  In three short years, her business had grown to the point that she needed more space.  Loving the neighbourhood, she bought a bigger building one block away and renovated it to suit her interiors business.   And me?  It did not take much effort for me to convert "the Pimlico building", as it is known in the neighbourhood, to its newest incarnation, Atelier Ivaan.  The store was already almost perfect.  Here's what it looks like today: 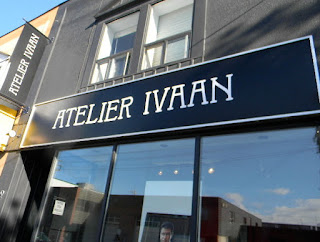 Now that the Atelier Ivaan store is perfect, I have my work cut out for me on the second floor.  Let's just say it's going to be a work in progress for quite some time.  My next  blog entry will feature "before" photos of the second storey...once I work up the nerve.  But the store?  Ivaan would be so thrilled with this place.  I nearly cried watching the sign and banners go up.  It was a proud moment.  Yes, February was a good month this year.  Thank you, Ivaan.