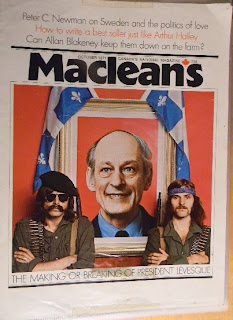 By late 1970, Ivaan was seriously, passionately interested in metal arts.  He loved everything about it.  As an experiment, he decided to make
himself a belt out of a strip of empty bullet casings he'd found in the neighbourhood Army Surplus store.  He cast a bronze buckle that he'd
designed for himself. This was a purely decorative belt, because all those bullet casings would never have fit through the belt loops of his jeans.  But he slung it around his hips over top of his jeans, and actually it looked pretty cool.

Ivaan was still working as a photographer for Maclean Hunter Publishing, but he was pretty much up all night doing experiments in metal arts.
He was burning the candle at both ends - so much so that he wasn't really paying attention to what was happening in the world around him.
He had never heard of the October Crisis, the FLQ, the kidnapping of James Cross and Pierre Laporte.  If he'd heard of it, he'd probably have  assumed the War Measures Act was the name of a band.

Ivaan was just happy doing what he did best.  And in that happy mood, he cheerfully volunteered on behalf of Maclean Hunter Publishing to drive out to the airport and pick up someone who was flying into Toronto to be interviewed for Macleans Magazine and to be photographed by Ivaan himself.  Ivaan jumped in his British Racing Green Volvo 124, with its saffron coloured racing stripes, parked the car, strode into the airport smelling of patchouli oil, long hair flowing to his shoulders, handlebar moustache drooping, wearing his black panama hat, his boots, and around his hips....the bullet belt.

Five minutes later, two security officers tapped him on the shoulder.  Ten minutes later, Ivaan was in the Airport Security Office being interviewed by the RCMP.  He took off his bullet belt, demonstrated that the shell casings were empty, produced his Maclean Hunter press pass, and half an hour later, he was released with a stern lecture about the seriousness of the War Measures Act.

One year later, Macleans Magazine sported this tongue-in-cheek cover shot by Ivaan.  Yes, that's Ivaan himself on the left of the photo.  I don't think the top brass at Maclean Hunter ever learned the true story behind this cover.   It's one of my favourite shots of him.
Posted by Eya at 8:22 PM