One of the goals I set myself when I moved here was to become as self-reliant as possible.  My unofficial motto was:  "If you're only going to hire a guy to do it, you might as well have stayed in Toronto".  Truth be told, many of the things that we do to keep a property in good repair are things we can do ourselves.  We might decide to hire someone else to do something for us, but what we are actually doing is spending money to avoid learning something new or doing something unpleasant.

If it involves plumbing or rerouting electrical cable, I call a professional.  Apart from that, it's my job.  And sometimes my job entails roofing. In the entrance to my property, there's a small grey wooden shed, about 10 by 10 feet, with a cement floor. 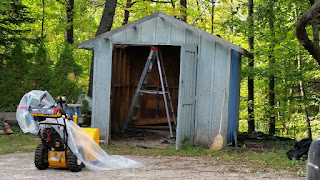 This shed, honestly, looks like it's tired of living.  But it houses the well, and the snowblower too,  so it's very useful.  It's dark and spidery inside. 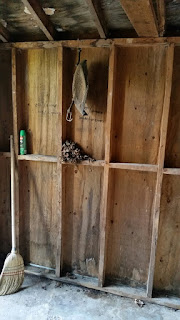 I suspect a tree branch had crashed through the roof and one wall at some point.  Luckily I had some plywood in another shed, so I decided I'd first replace the broken section of wall. 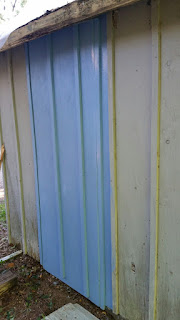 That went very easily.  On closer examination, I noted the roof had pretty much rotted through, so I decided to remove the entire roof and replace it. 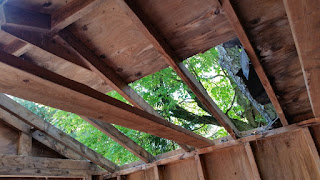 A professional would have had that old roof removed in half a day, but I decided to work at it more slowly.  Removing layers of asphalt shingles is harder than it looks, especially when you realize there are multiple layers of them in places. 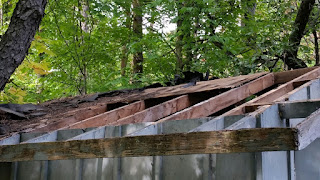 It took me two and a half days to get that roof off.  One of the ribs supporting the peaked roof was missing, but I had some two-by-fours and I was impressed how quickly I managed to replace it. Once the roof was off, the entire shed was flooded with light and looked far less spidery.  My neighbour Liz snapped this photo of me, which she entitled Local Roofer In Action. 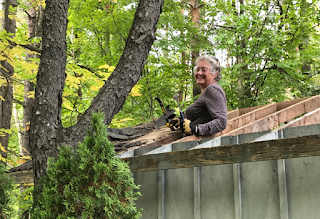 As there's no electricity in the shed, I realized that if I installed a transparent roof instead of a plywood and shingle roof, I wouldn't have to light it.  Because it was about to rain, I got out my roll of transparent vapour barrier and covered the roof with two layers of vapour barrier which I attached with a staple gun. 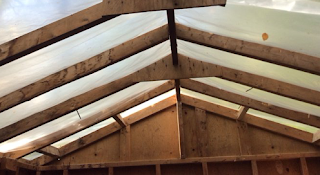 I found I liked being in the shed with the rain beating down on the vapour barrier.   But I noticed I was doing everything possible to delay putting the new roof on.  I knew what the problem is:  I don't like doing hard work in the cold.  So I've started painting the exterior of the shed.  I chose a colour called Gossamer Blue, which looks really different depending on the light. Sometimes it's dove grey, sometimes it's robin's egg blue.  But it looks fresh and somehow that sad little shed is beginning to show some spirit.  Of course, as soon as the painting is done, I'll have to start putting on the new roof, so I'm dragging my paintbrush as slowly as I can.


I was feeling quite proud of myself, and we all know what happens when you start to feel proud.  I had left my eight foot A-frame ladder inside the shed, and I wanted to move it to a more auspicious location, so I grabbed hold of it and started to drag it.  That's when a hammer I'd inadvertently left on top of the ladder fell off.  The business end of the hammer hit me on top of my head, flipped over, and the claw end of the hammer hit me on the forehead just before knocking my eye protection off.  I could feel blood streaming out of my forehead and into my right eye, down my clothes and onto the ground. Honestly, I looked worse than the shed.

I'd better go to the hospital, I thought.  Then I realized:  I can't go to the hospital.  I have no idea where a hospital is, I don't want to get blood in my new car and anyway, I can't even see.  So I went inside, found a bottle of isopropyl alcohol, cleaned up my head wound, then had a bath and a long nap on the sofa before the fire.   And, since my other unofficial motto is, "You can do as good a job as a professional if you want, but it's going to take you a lot longer", here is a photo of my progress to date. Luckily the next couple of weeks are going to be mild and dry, so I'll have no excuses not to finish my roofing project.  Stand by. 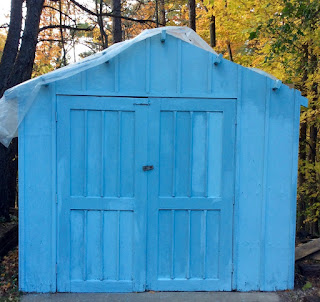