TWO DAYS: FROM LAUNCH TO LAUNCHED

Sunday April 30th was a triumphant day at Atelier Ivaan, as we hosted the launch party for 30 Pieces of Silver.  It's hard to imagine that we packed 35 people into this little place.  We can't actually prove it, because it was so crowded we couldn't take photographs, but we opened up the second floor and the basement so people could  escape the crowds if they were feeling suffocated.

I spent the morning driving around picking up the Sweets From The Earth carrot cake, the samosas and the falafel/pita/tahini/pickles which I'd ordered.  Just after I arrived back, my nephew Angus's partner, Sara, arrived to help me set up.  That's when the fun began, because she let it slip that Angus was flying in from Winnipeg to attend the launch.   I was so thrilled.  A few minutes later, I heard a key in the lock, and I thought, "Angus!"  But no:  it was Ivor, my other nephew (who is the VP of Atelier Ivaan).  He had driven in from Kingston to surprise me.  I was completely beside myself.  Sara had managed to keep that little detail secret.  She's tricky that way.

So I felt on top of the world.  I didn't care if anybody else came at that point, because my boys and Sara were here.  And we had cake! Here's what the shop looked like before we put the food out: 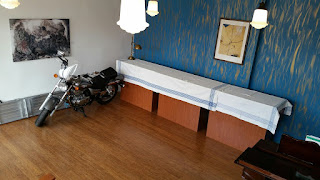 Then the guests started arriving.  It took people a while to start digging in to the refreshments, but at any party, once there is a critical mass of people, they will generally start eating and drinking.  We reached that critical mass within about half an hour.  We had planned the launch to be held from two until five in the afternoon, but in fact it was seven before the last guest left.

To my amazement, when I went upstairs, the nephews and Sara had already done the dishes and much of the cleaning up.  So in addition to coming from great distances to Toronto, they acted as gracious co-hosts, and then became the busboys.  That evening, Ivor drove Angus back to Kingston to visit their parents.  They were both exhausted when they arrived. It was a stellar gesture of support from both of them.

Two days later, I headed for the airport, where I met up with Ivor, and the two of us boarded a plane for Iceland.  We'd been talking about taking a trip back to Iceland together for a while.  I'd decided to go, and finally Ivor booked himself a seat on my flight, directly across the aisle from me.  We had a great flight and arrived to beautiful weather in Reykjavik.....just as torrential rains started in southern Ontario.  Meanwhile, the Icelanders thought we'd brought the gorgeous weather with us, because it remained glorious all week.

Here's the house we stayed in, on Bergstaðastraeti. It's a 110 year old wooden house clad in metal.  That's very, very old for an Icelandic house. 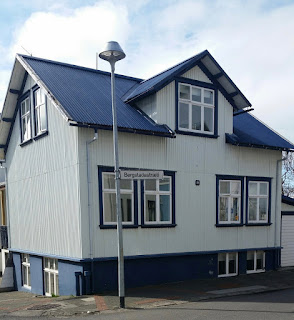 The first day, we took it easy and walked around downtown Reykjavik, visiting Hallgrimskirkja, the very large modern Lutheran church close to our house, which has a magnificent pipe organ.  We went up the tower for a fantastic 360 degree view of Reykjavik. 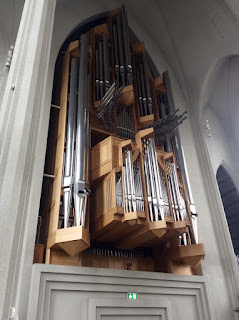 Then we went to Glō, one of our favourite vegan restaurants, and then walked along Laugavegur, the main shopping street.  Here are some photos of buildings we passed. 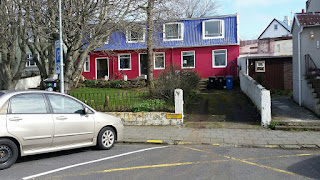 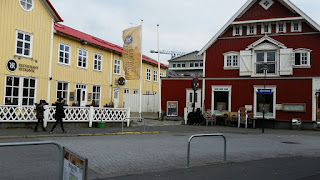 We planned a trip to Vestmannaeyjar, some islands off the south coast of Iceland which had been buried under a volcanic eruption in 1973.  This involved a two-hour bus ride at seven a.m. to Landeyjahofn, the harbour where the ferry to Vestmannaeyjar sets sail. Here's the ferry. 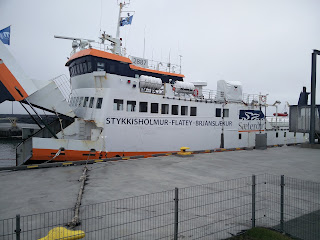 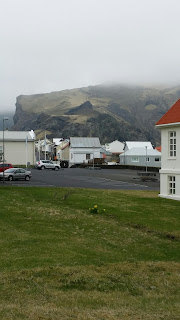 The 35 minute crossing was very rough.  When we arrived at Vestmannaeyjar, I was pretty sure I'd made a big mistake, because as beautiful as the islands were, I knew we'd have to return on the same ferry.  When you travel with a 19 year old, though, you can expect miracles.  A few minutes of sipping warm ginger ale while watching Ivor's thumbs on the keyboard of his phone yielded dramatic results.  "There's an airport within walking distance", he said.  "If you can walk up that hill for about an hour, I've booked us on a small plane to fly us back to Reykjavik". At that point, if he'd told me to walk up Mount Everest to get on a small plane, I'd have done it.  Sure enough, we walked past sheep and unusual buildings and eventually ended up at a tiny airport which was totally unoccupied.  About an hour later, a small plane landed, we got on board, and within 20 minutes we were back in Reykjavik.  Here is some of the scenery en route to the Vestmannaeyjar airport: 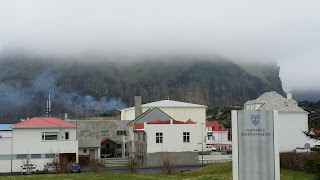 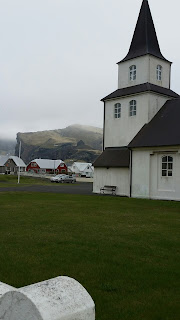 On one of our remaining days, we visited Harpa, the exquisite concert hall on the Reykjavik Harbour.  It's like being in a honeycomb.  Ivor pointed out that Icelanders don't use it just as a concert hall.  It's also a sort of community hub where people meet to talk or have a snack, or attend a party.  But apart from its social significance, it is a magnificent concert hall.

Another highlight (for me, anyway) was buying a summer dress at Kjolar & Konfekt, though Ivor was surprisingly supportive through this process.
Here's my flamingo print dress: 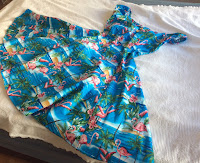 We also took a small (very pleasant) ferry to Viðey, to visit the John Lennon "Imagine Peace" memorial (here's Ivor at the memorial) . 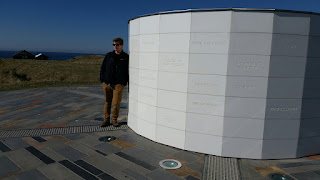 And I braved the cool waters of the North Atlantic to retrieve a stone to bring to Ivaan's grave.  We brought back some pieces of lava as souvenirs and gifts. On our way back to the airport for the flight back to Canada, we stopped at the Blue Lagoon for a soak in the thermal baths - a surefire way to ward off jet lag.

This was my fourth trip to Iceland, my second with Ivor, and my first with Ivor as an adult. Would I do it again?  In a heartbeat. I love travelling with him. He's super easygoing, up for any adventure, and nothing fazes him.  He fit right in to Icelandic culture and people just assumed he was Icelandic. He picks up languages easily, so by day four he was answering them back in Icelandic.  We are going to try to keep up our Icelandic till our next visit - because we are definitely going again.