HOW TO RENDER ME SPEECHLESS

People often get in touch with me to say they've acquired a piece of jewellery by Ivaan, and they are curious to know more about it.  Mostly, they've

inherited it from a relative, and almost invariably it will be a production piece: an item of costume jewellery made of non-precious metal.  Very rarely, someone will send me a photograph of a piece of Ivaan's jewellery that will be so astonishingly rare that my head starts spinning and I can hardly type a coherent response to them.

One such instance occurred a couple of weeks ago. A woman, coincidentally named Connie, who lives in Hamilton, emailed me to say she'd just bought a very unusual ring by Ivaan in an antique shop in Cambridge, Ontario, and she wanted to know more about it.  She sent me a photo, and explained that the ring was engraved IVAAN 1978 STERLING 1/1.

It was hard to tell from the photograph exactly how large the ring was, but I was extremely anxious to see it, because it reminded me a lot of a famous ring by Ivaan that we call the "Connie" Ring, and I wondered if by any chance it was the prototype for the Connie Ring, or a missing link that Ivaan made before making the Connie Ring.  One thing I was certain:  I had never seen this ring before.

My curiosity was killing me.  I emailed Connie and asked her if I could send a courier to pick it up, as I'd love to see it, photograph it, and restore it to its original glory for her.  She kindly agreed, and it arrived this morning.

It's a mark of how excited I was that I had to forbid myself to touch it for several hours, until I calmed down.  I didn't want to do something impulsively that might have damaged it.  Silver is a soft metal and this ring is - as the inscription says - a "one of one".  There is no mould. I thought for a moment that perhaps I should make a mould of it, but quickly realized that if Ivaan had wanted a mould made, he'd have made one himself.  He clearly intended it to be an original, and I don't second guess him....unless he's wrong!

Here's what I know about it:  it's a size 7, which is a medium-size ring for a woman to wear, or else a ring for a man's little finger.  But it's far too big and heavy for a little finger.  Connie told me she asked if the antique shop owner had any other pieces by Ivaan, but sadly this was the only one. I'd been hoping she'd bought some estate jewellery that perhaps included other pieces by Ivaan.

Here is another angle: 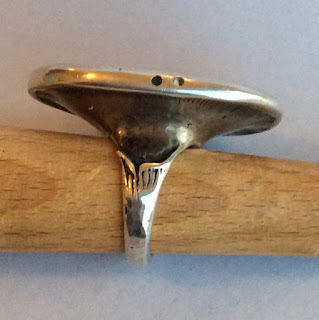 It looks as though the ring has not been worn much, as it's not very battered looking, but it is exceedingly tarnished and in need of some love.
So I've started to undertake some restoration.  Here's where I've gotten so far: 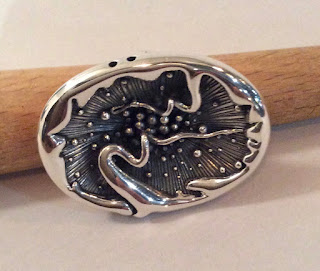 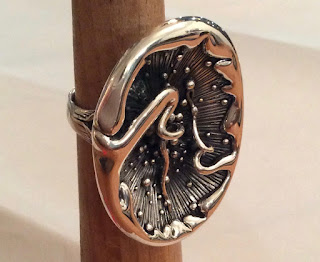 Stand by for further developments.  It shouldn't take me long.  It's a proud moment for me, being able to bring a genuine original work of art by Ivaan back to life.