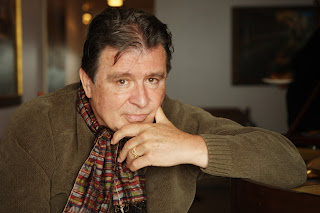 Every imaginable emotion comes to the surface in the weeks leading up to December 6th. I remember when Ivaan died, it wasn't a sudden event. It was a slow withdrawal from the world that started on December 2nd when he underwent a pioneering neurosurgical procedure to close off a damaged artery in his brain and reroute the blood flow through a newly constructed blood vessel.  It was incredibly risky, and he knew that.  He knew the chances of survival were no more than fifty per cent.  Even if he survived, he knew he might not have a functioning brain.  He wanted to have the surgery to contribute to medical knowledge, and to be the first in Canada to undergo the procedure.  If he'd be left without a working brain, he was clear: he didn't want to stick around.

In the end, there was no choice to make because he suffered a massive stroke during the surgical procedure.  We waited a day or so to see if he was going to regain consciousness.  He underwent a further procedure to drain fluid from his skull to relieve the pressure on his brain.  When he was disconnected from the machine that kept him breathing,  he unpredictably started breathing on his own.  It was agony, not knowing what was going on in there.  After days of no sleep, I was finding it hard to think rationally and I needed someone to do the reasoning for me.    Yet  it has always enraged me when someone says, "Ivaan wouldn't have wanted...." or "Ivaan would  have wanted..."  Honestly, when that happens, I can barely contain myself.  Ivaan lived according to his own wishes till he married at the age of 50.  Even after he was married, he was a pretty independent thinker.   He wasn't big on asking others for advice. So I just look at people who try to tell me what Ivaan would have wanted, and say, "And you speak for him?"

Technically, his heart stopped beating on December 6th.  His brain seemed to have shut down on December 5th. So for me it was a matter of interpretation and I am fairly sure it would have been a question over which Ivaan would have struggled.  But December 6th marked the National Action Day on Violence Against Women, and it was hard to associate that dreadful day with the death of my beloved Ivaan.  So for the immediate purpose of his funeral, we called it December 5th.  With the passing of time, I've come to accept December 5th as his "public" day of death, and December 6th is the day I privately mourn.

Every time I see this photograph of Ivaan, I say a silent thanks to our friend Slava Lukashenkov, who took the photo in the August before his death. It's art imitating life.  At the very right of the photo, I'm just walking into the frame carrying a plate of food to Ivaan.  Slava captured Ivaan exactly as he looked, and whenever I see this photograph, it's like having Ivaan in the room.

For me, it's off to the cemetery today, to cover Ivaan's grave with a blanket of evergreen boughs.  Got to keep my boys warm for the long, cold winter ahead.  Je ne vous oublierai jamais.