Sometimes I'll mention Naufrage in passing and observe a quizzical expression on the face of my listener.  I forget that it has become part of my existence with almost no effort on my part.

About nine years ago, Ivaan and I went to Prince Edward Island by train, accompanied by our nine-year-old nephew Ivor, who hopped on board at Kingston.  We were travelling first class, as Ivaan was in a wheelchair and that entitled him to a free-of charge able-bodied companion (me).  So with all that money we were saving, it made no sense not to invite Ivor along.  The train took us to Moncton, New Brunswick, and we had a rental car waiting at the train station, so we climbed in and continued on our way.

I'm almost embarrassed to admit that I didn't realize the Confederation Bridge is not actually in Moncton.  In fact, it's almost 100 kilometres away, so for a couple of hours we searched in vain.  Eventually, a local took pity on us and pointed us toward the highway.  By that night, we were in Summerside PEI.  Our plan was to drive around the perimeter of PEI, starting in Summerside and finishing up in Charlottetown.  Ivor got to pick the hotels, which was fine by us.  We'd drive into the parking lot, send him into the lobby, where he'd approach the front desk and ask the clerk:  "Does your hotel have a swimming pool?  Does the pool have a water slide?  How long is the water slide? Is the water slide straight or curved?"  You know, the important questions.  If he leaned out the front door with a "thumbs up", that meant we'd found our hotel.  Thumbs down?  We kept on driving.

On the north shore of PEI we passed through a town called Naufrage, which means shipwreck.  It's a barren coast and there's a lighthouse, so it seemed self-evident how the name came to be.  We were all lovers of lighthouses (phares, in French) and best of all there was a little family restaurant that had plenty of vegan items on the menu, including fried zucchini which was delicious.  We thoroughly enjoyed our stay in Naufrage.

It became a recurring theme between Ivaan and me,  after our return:  what would you want to have with you on an ocean voyage?  I've crossed the Atlantic by ocean liner three times and so mostly I know what I don't want: parsnips and artificial whipped cream.  Ivaan had crossed the Atlantic once as a refugee in 1949, and ocean liners always fascinated both of us.

2015 was the 100th anniversary of the sinking of the Lusitania and it seemed like an auspicious occasion to launch a small subsidiary shop that sold provisions you might like to have on an ocean voyage, or anything maritime in flavour, although no cutesy little lighthouse-shaped salt-and-pepper sets. Everything had to be well made, genuinely beautiful, useful, and not easy to acquire. Naufrage seemed the logical name, in honour of the Lusitania and our trip to PEI.

Here's a photo from inside Naufrage. 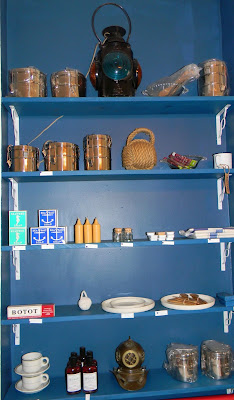 And because no shop bearing Ivaan's name would be complete without its own postcard, we did up a Naufrage postcard, too.The shipwrecked liner is, in fact, the Lusitania.  Its stark beauty would entrance Ivaan, as it does me. 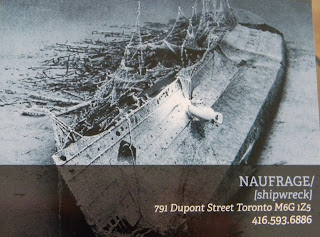 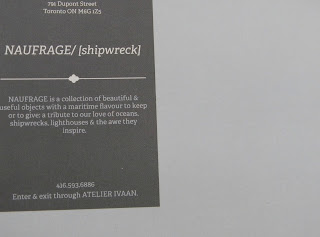 So now you know. Keeping items in stock is a real challenge, as many of them come from afar, but I've noticed that a hostess gift from Naufrage is always received with pleasure when I dine with friends.

A lot of water has passed under the Confederation Bridge since our trip to PEI, but Ivor (now an Engineering student at U Ottawa) was here last week, and we reminisced about our adventures in PEI.  So I thought I should tell you about Naufrage.
Posted by Eya at 6:40 PM