We know a guy named Klaus who was kind enough to have his collection of Ivaan jewellery photographed for our website.  His collection includes a couple of bracelets, a couple of brooches, an earring, a couple of rings (including his wedding ring, which is a particularly nice piece of art, but that's another story).

Among the items is a bangle style bracelet, which is shaped like a bicycle tire. I'm always really glad when someone sends me a  half decent photo of Ivaan's work.  Here it is: 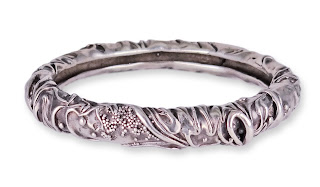 At about the same time, a magazine in Alberta which is featuring an article about Ivaan wrote to ask me for some high-resolution photographs of Ivaan to accompany their article.  Since the article is about both Ivaan's Alberta connection  and his art, I thought it would be good if I could find some photos that showed him at work.  I frequently say that the word "paranoid" is often thrown around loosely, but that in Ivaan's case, it's probably not strong enough to describe his hypersensitivity to people watching him at work.  So, unless the KGB really was doing surveillance, there likely are no photos of him at work.

So I sent them a photo of Ivaan in the late 1980s in his workshop, posing beside a piece of equipment. Was he working at the time?  Definitely not. He wasn't wearing a shirt, and most of Ivaan's work involved flames, hot wax and flying pieces of metal. But in looking at the photograph, I  noticed that the wax of Klaus' bicycle tire bracelet, in embryonic form, was lying beside him.   It was a long, long way from completion, and it's almost chilling, realizing how much work went into making it into an elaborately embellished sterling silver bracelet.  But, as you can tell from the photograph of Ivaan below, he was young and perhaps thought he had a long life ahead of him. 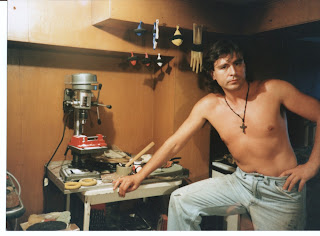 Today is our  21st anniversary, and now whatever work gets done is done by me.  It is a lot of work (says she through gritted teeth.)  Sure hope you don't want a nice bracelet like Klaus has.  If so, you may be waiting a while.   Happy Anniversary, Ivaan.  I miss you for much more than your art, but when I look at this bracelet, I miss you profoundly for your intense devotion to creating beautiful things.
Posted by Eya at 5:52 PM