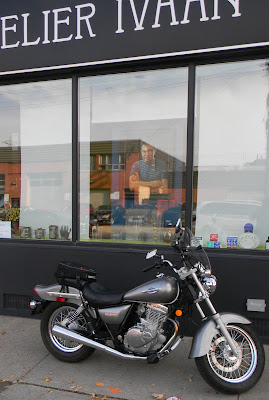 In 2000, I decided to sell my beloved red Kawasaki motorcycle.  It wasn't a hard decision.  Ivaan had his first stroke early that year.  There's a saying among Toronto motorcycle riders:  "If your front tire gets on a streetcar track, there's only one place you're going:  the Humber Loop".  For non-residents of Toronto, the Humber Loop is the western junction of several streetcar lines, and the expression means it's not easy to get your tire off a streetcar track, so you should only intersect with one at a right angle.

Strokes are a bit like streetcar tracks.  If you've had one, you can pretty well stop worrying about dying of anything else.  I knew Ivaan would need me to look after him in the years to come, which I wouldn't be able to do if I injured myself on my bike, so I sold my motorcycle and tried not to look back with regret.  But every spring, when the sun was out and the roads were dry and I heard the distinctive rumbling of someone else's motorcycle, I felt a pang of loss.

Five years and two more strokes later, when I left my career to take care of Ivaan full-time, one of my staff members who has a dark sense of humour wrote me a note: "The day after the funeral, you'll be the woman in the red dress at the motorcycle dealership".

In fact, six years after Ivaan's death, I had begun to wonder if my courage was failing me. Maybe I was just too old for a motorcycle.  But I did spend a bit of time online, researching what bike I'd buy if I were going to buy one.  And one day, I Googled the name and model of the bike I'd have liked, and up popped this perfect specimen.   Everything about it was right: the size, the colour, the price, the accessories.  Just to prove to myself that I wasn't impulsive, I waited a full 24 hours before I headed for the dealership - just to look at it, you understand.

I didn't even take it out for a spin. I did the math:  I already have a motorcycle licence plate.   I still have my helmet, and Ivaan's too.  I have a leather jacket and motorcycle boots.  In short, it would be a crime against economics not to buy it.  Or so I reasoned.

Yesterday I went down to the dealership with my original licence plate and my helmet, and left them there with the bike.  And today, there it was, outfitted with my plate,  just begging me to ride it. I was completely freaked out.  After all, I hadn't ridden once in 15 years.  I assumed it would all come back to me, but as I sat on it, I was reciting the checklist to myself:  Fuel. Ignition. Neutral. Electric. Choke. Clutch.

Suddenly, I heard a voice calling me. It was Doug, one of the owners of the dealership. He said, "You haven't ridden for 15 years.  You need to practise in the laneway before you head out on a main street."  It was like the voice of God bringing me to my senses. Doug wheeled the  bike round to the laneway behind the dealership and said, "Ride up and down the laneway a few times. Don't get out of first gear till you're comfortable with it."  I did what he said, but half way up the laneway, boom, I felt so comfortable, I shifted smoothly into second gear and just kept right on going.

Maybe tomorrow I'll bike down to the dealership again and thank Doug.  All things considered, he probably saved my life.