In 1968, while working for Maclean Hunter Publishing,  Ivaan was sent to photograph various First Nations people for a Chatelaine article Barbara Frum was writing, entitled Canadian Indians 1968:  How Ottawa (And We) Slept.  Five years later, Maclean Hunter disbanded their in-house photographic studio. All the staff photographers' negatives and prints were discarded.  It was a disgraceful waste of valuable Canadian archival material. Ivaan, hearing about the disposal, rescued as many significant examples of his work as he could, and kept them. Instinctively, he knew that these were too important to be thrown away.

After Ivaan's death, when I was sorting through the tens of thousands of photographs he'd accumulated, I came across some enlargements and all the negatives from this Chatelaine photo shoot.  I knew they were from his Maclean Hunter days but beyond that there were few clues.  I decided to do a little detective work, and eventually located a copy of the November 1968 issue of Chatelaine, containing the article, in the Toronto Reference Library.  The article provided the names of the people Ivaan had photographed.  I decided that the photographs and negatives should be offered to them, or to their families, and I conducted an internet search to locate the individuals.

One group of photos was of a slight, pretty young woman named Elda Smith. She was a Mohawk potter who combined traditional techniques and motifs with her own distinctive artistic flair. I learned that her work was highly respected and valued and that she had been commissioned to make a piece of pottery as a gift for Queen Elizabeth II.   Although Elda was no longer alive, I was able to make contact with her son, Steve Smith, himself an acclaimed pottery artist in the Brantford area.  Steve was thrilled when I offered him the photographs and negatives, because although they had a copy of the Chatelaine article, they had few, if any, photographs of his mother.  So I packaged them up and sent them to Steve.

A few months later, I received a large box in the mail.  Here's what it contained: 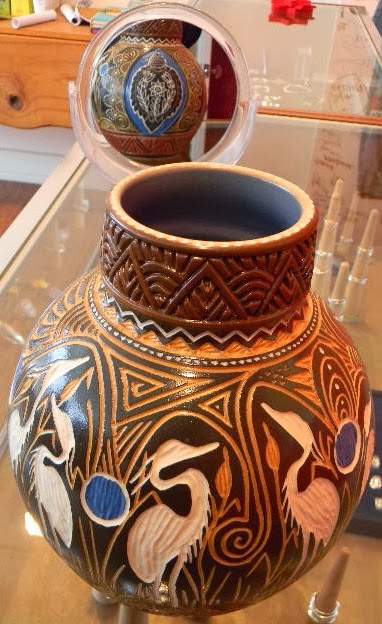 I was overwhelmed.  It looks beautiful in the photograph (and you can see the other side of it reflected in the mirror behind it), but nothing compares to seeing it up close, and actually holding it.   It took a while for me to realize that there was some paperwork rolled up inside it, fastened by a leather thong. I untied it, and read this letter: 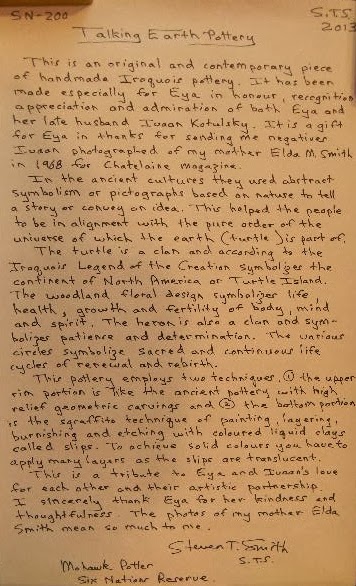 This beautiful vase is proudly displayed in Atelier Ivaan.  I look at it every day. I know Ivaan would have appreciated my efforts to "close the loop" by giving these photographs to Steve Smith, and I know he would have loved and cherished this piece of art as much as I do.  It will be with me, as will Steve's letter, for as long as I live.  Thank you, Steve, for this magnificent gift. I feel honoured to accept it, in memory of your mother, and on behalf of Ivaan.
Posted by Eya at 7:12 PM