People often ask me to show them the final piece Ivaan made before he died, and while I think that the last gold pieces may have been the engagement and wedding rings for Gareth and Meghan, his truly last pieces were actually made of fresh bread.  In childhood, Ivaan would rip a small piece off any loaf of bread he could find, and roll it between his thumb and forefinger. Initially, he'd roll it into a ball, which he'd throw for his cat to retrieve.  These were called rollies, and every one of Ivaan's cats had lightning reflexes, honed from chasing rollies, usually down a flight of stairs. If the bread was fresh enough (and Ivaan could never tolerate bread that wasn't extremely fresh), Ivaan soon found that he could make beautiful little rosebuds. If his mother caught him rolling bread between his fingers, she would whack his hands, so most of his rolling activities were conducted in secret.

About three years before our marriage, I was looking at some of his rollie rosebuds and jokingly suggested that he make my wedding ring out of bread roses.  It's a mystery why Ivaan had never thought to cast his rosebuds before, as he'd certainly cast plenty of other unorthodox materials, but he got to work rather quickly and this is the result: 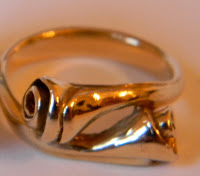 He actually gave it to me as an engagement ring, after I balked at having to wear the ring with which he'd proposed. 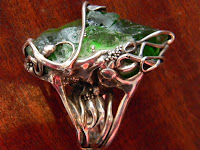 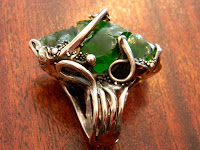 Ivaan had a joke about the rings he made.  He'd tell customers, "I only make two sizes:  too big and too small".  So this ring was literally too big (the top part) and too small (the band).  I still have it, and love to look at it, but wear it?  Not so much.

As Ivaan became more paralyzed, he required more and more help to do his work.  At first it was merely holding something, while reading my book. Then it was taking things to the caster for him.  Once he realized that I'd acquired enough passive knowledge of jewellery polishing to be useful as well as decorative, my fate was sealed.   I only wish I had a photograph of my first serious polishing project.   It wasn't a piece by Ivaan at all.  It was a gold-plated chalice from Ivaan's church.  The plating had worn badly and his priest wanted it replated. That meant removing every vestige of gold from its exterior and starting again. Ivaan definitely did not want to tackle this project.  He totally loved his priest and didn't want to disappoint him, but he looked at this project, saw immense possibility for risk and hours of excruciating tedium, and put it aside.  When I volunteered to tackle the chalice, Ivaan was horrified.  He told me he'd decided it couldn't be done.  I insisted we either do it or return it to the church, because I didn't want it on my conscience. One day when I was alone in Ivaan's studio, I decided to try a section of it myself.  The next time we were together in the studio, I showed Ivaan my efforts.  He gave a grudging nod of approval. His priest seemed very happy with the finished product, but I still wonder whether he was simply relieved to see the chalice again or impressed with what Ivaan had been able to accomplish, with only his left hand.

In the last year of Ivaan's life, we lived in a condo on St. Joseph Street.  Every day, we'd shop for the freshest bread and Ivaan would hone his rollie rosebud skills.  When jewellery polishing was required, I'd set up the polisher in the kitchen and use the window for ventilation.  That's where Gareth's and Meghan's rings got completed.

Four years later, I still have jars full of rollie rosebuds.  I've moved three times since Ivaan's death, and I know it's time to part with them. They are, after all, petrified bread.  And Ivaan abhorred stale bread. But I've taken a photo of my wedding ring, nestled amongst its descendants,  to show you.  I wanted you to see the last work he did on earth.

Permitte Divis Cetera.  The rest, leave unto the Gods.