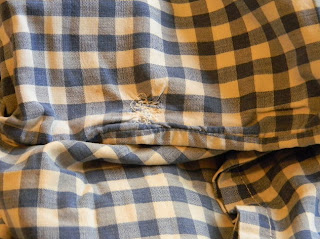 If I ever had to flee from my house due to a fire, the list of things I'd take with me would be mercifully brief and easy to locate.  This piece of blue gingham cloth would be close to the top of the list.  It looks like a well-washed and often-mended cotton cushion cover, measuring about  19  by 22 inches. When Ivaan was a baby, and his family was interned in a Nazi slave labour camp near Cologne, Germany this was his only protection from the cold.  I have a tiny photo of Ivaan with this piece of cloth on his bed.

The harsh conditions under which Ivaan was born and lived in his early years meant that he was never physically robust, either in childhood or as an adult. Even if you'd known Ivaan for decades, you would never have known the incursions frail health made on his life.  He never talked about it.  People who saw him deliberately avoiding physical strain assumed he was either lazy or that he considered physical toil beneath him.  Ivaan never corrected either assumption.

On January 6, 1993, Ivaan helped me carry a small kitchen stove up two flights of stairs one morning before he went to church.  Half way through the church service, he had his first heart attack.  He got up and walked out of church, ignoring the disapproving glances of fellow parishioners, crossed the street and walked into the hospital.  The Cardiology team later told us that if he'd arrived five minutes later, he would have been horizontal...on a slab.

Ivaan's family kept this piece of blue gingham cloth as a sort of talisman that would keep him from harm.  I keep it in his top left dresser drawer.  If you're ever at my house and fire breaks out, please save Ivaan's "blanket", because I treasure it.
Posted by Eya at 4:29 PM