SEPARATED AT BIRTH: The Sequel

A very valuable lesson I learned from Ivaan early in our friendship was, "Never say you're going to do something until you've already done it. This will greatly enhance your appearance of being successful." I should have thought of that before I wrote, in the post before last, that I was going to cast the Separated At Birth ring in sterling silver and set the stone in the silver version.

I've been working at it ever since.  It is still not done, but barring any unforeseen eventualities like the stone shattering (may it not come to pass), the ring is now within sight of completion.  It is at this precise stage that I should have written, "I think I'll cast it in silver and set the stone in the silver version."   Grrrr.

"Si j'avais su" often seems to be a recurring theme in my life, and it certainly was in this instance.  Had I known it was going to be half this much work to cast the master in sterling silver and set the stone in it, I would simply have set the stone in the bronze master, given it a good polish, and gone for a manicure, secure in the belief that I had carried out Ivaan's wishes.

Instead, my hands look as though I've been coal mining, the ring isn't finished, and neither is my term paper on Italian Sociolinguistics.  And who can write an academic paper with fingernails like these?

Here are some photos of the work in progress.  I've still got some work to do, mostly on the strands that connect the band to the bezel, but chances are I will get it finished this week.  I'm still not sure what the stone is, but it's possibly ammolite:  time - and Tamas - will tell. 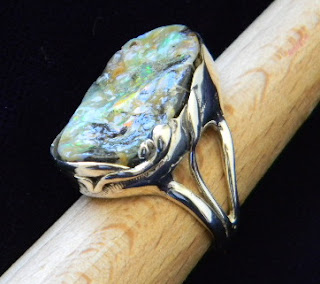 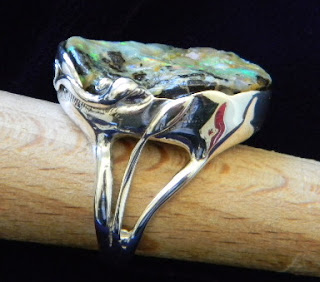